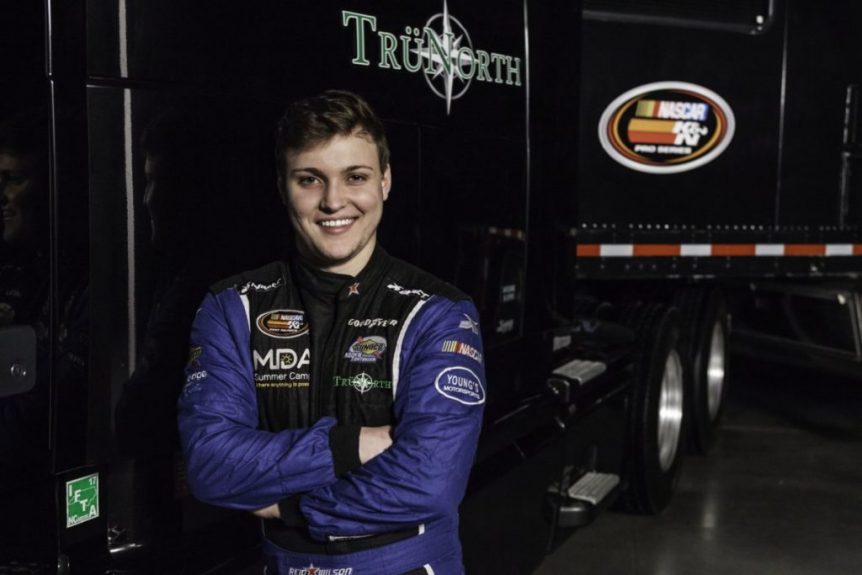 TrüNorth® Warranty Programs, the most comprehensive warranty protection for North American truckers, will continue their support for Wilson in 2017. “Truckers love racing and we’re proud to have Reid represent our brand on and off the track,” said Kirk Eskridge, CEO of TrüNorth®.

“Man, I’m so pumped about my relationship with TrüNorth and returning to Young’s Motorsports this season,” said Wilson who scored two top-10 finishes last season. “We took a leap of faith on working with each other last year and the partnership has worked out great. Together, we have a great team with one goal in mind, winning.

“I’m anxious to get to New Smyrna this weekend and get our No. 66 TrüNorth Warranty Programs / MDA Summer Camp on the track. We had a solid effort there in 2016, but we’ve achieved so much more since then; I think we can go to New Smyrna now and easily contend for a top-10 finish right away.”

Wilson, who is a member of the Muscular Dystrophy Association Muscle Team, will continue to show his support for MDA Summer Camps, by hosting a group from MDA Central FL, including staff, parents and children, starting with the NASCAR K&N Pro Series East race at New Smyrna Speedway on Feb. 19, and at each of his races throughout the season. Wilson has been a member of the MDA Muscle Team, a group of professional athletes, since age 10 and also serves as a MDA Camp counselor. The MDA kids will meet with Reid and other drivers for autographs, dinner and be up close to the race cars with an opportunity for photographs.

In 2016, as a NASCAR K&N Pro Series East rookie, Wilson had two top-10 finishes in only four NKNPS East races. He was ranked ninth among 27 drivers by Motorsports Analytics for best on track production.

Before joining the NKNPS, Wilson had a healthy stint in what was formally known as the Pro Cup Series, where in 20 races, the Huntersville, N.C. native produced one pole, seven top-five and 17 top-10 results. His Pro Cup career-best finish was second at Tri-County (N.C.) Speedway in 2014.

With an array of experience and four starts to his resume in the K&N Pro Series East, Wilson believes his Young’s Motorsports team led by Andrew Abbott has the potential to contend for the win, given the right circumstances.

“Andrew is always motivated to win,” added Wilson. “He has a lot of faith in what I’m telling him about the race car and the changes he makes improves our performance. We know we’re capable of running in the top-10 and with some luck, we could have had some top-five finishes, maybe a win sooner than later.

“Reid had a lot of speed last year, but circumstances kept us from a few good finishes,” Young said. “We’re glad to have him back. Hopefully, we can go to New Smyrna and have a good showing this weekend that will propel us for the rest of the races later this season.”

“Ultimately, that’s our goal,” said Wilson. “If everything comes together like we hope, we’ll put a race on the schedule with Tyler later in the year that makes sense for me and TrüNorth™ to have the best finish possible.”

You have Successfully Subscribed!